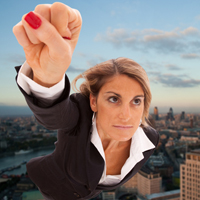 Disappointment is one of those universal experiences that can leave a devastating path of destruction in its wake. It can hit you with the same force and ferocity as a hurricane and leave you confused, disoriented, and asking yourself “why me?”.

Whether it’s because a job offer went to another candidate, a relationship didn’t work out, or a recent audition for Survivor didn’t come to fruition, the feeling of disappointment is the same…and it doesn’t feel good.

Ever since I very publicly announced my intention to audition for the reality show, Survivor, for the fourth time, I have received a lot of inquiries about how it went and my current Survivor-status. I have good news and I have bad news.

The “good news” is that I absolutely nailed the audition! I had my 60-second script completely memorized and I delivered every word with passion and enthusiasm in true Woman UP! fashion. When I finished, the cameraman said my audition was, “Perfect!”, and the CBS producer pulled me aside, complimented me on my energy and overall camera-presence, and then took several individual pictures of me.

As you can imagine, I was on cloud nine. I knew I had done a great job, and then to receive all that positive feedback, I didn’t have a doubt in my mind I’d be moving onto the next step of the interviewing process. In fact, I was practically packing my bags and saying my good-byes, because I clearly was going to be on the next season of Survivor.

Keep in mind that I have coached hundreds of professionals through the interviewing process as they try to secure a new job offer. I know firsthand that it’s an unpredictable and often irrational roller coaster ride filled with extreme highs and lows. Even though my clients have a nearly 100% success rate, they have also experienced more disappointments than I can remember. It’s heartbreaking and devastating, and it never gets any easier.

The rational and experienced side of my brain fully understands that auditioning for Survivor was a long-shot. I’m sure the odds are about a bazillion to one, but it doesn’t lessen the pain of the disappointment.

The “bad news” is that my phone has not rung nor have I received an email from Survivor inviting me onto the next round of interviews. And, yes, I have checked and double-checked my technology. There is nothing wrong with my phone or computer. They probably just decided I wasn’t Survivor material…they decided they didn’t want ME.

There is no disappointment like the one that feels personal. When there is something you really want – like a new job or spot on Survivor – and the decision-makers survey the candidate pool and select someone else, it feels like you got hit in the gut and it take the wind out of your sails.

For more than 20 years, I have helped my clients deal with disappointment and stop the downward spiral after some bad news (or no news at all). Since I have yet to hear back from Survivor, it’s time I take my own advice and deal with my own disappointment. Here are three steps to defeat disappointment:

1. Move forward and get yourself out of limbo. The only thing worse than disappointment is the endless waiting in limbo; it’s the not knowing. Limbo is that unproductive space where time stands still and obsessive thoughts take over. It takes an enormous amount of energy to replay and second guess those interviewing moments, and then to try to predict all the possible outcome scenarios. Living in limbo is exhausting. Dismiss the disappointment, then plan for and take your first step in a new direction. Even though you may be disappointed by the outcome, at least you know and can then move forward.

2. Recognize that it happens for a reason. I may not have solid scientific evidence, but the anecdotal evidence over that last 20 years is overwhelming. Every time a client has been disappointed because he/she didn’t receive a coveted job offer, a better job offer was right around the corner. Often, that disappointment is really a blessing in disguise.

Even though there still might be a snowball’s chance that I’ll get a call, it’s time to finally deal with the disappointment that my dream of starving on a tropical island with a bunch of strangers could be over. I am no longer in limbo rushing to the phone every time it rings, obsessively hoping it’s Jeff Probst. I know that the reason it didn’t happen is because I need to focus all my energy and attention on the success of Woman UP! And, I know I don’t have any regrets. I tried my best and gave it my all, and I’ll still be a raving Survivor fan from my couch.

Woman UP! Your Way to a New Year (Big Gift Inside!)

Happy New Year! Not only is this the start of a new year, but also…