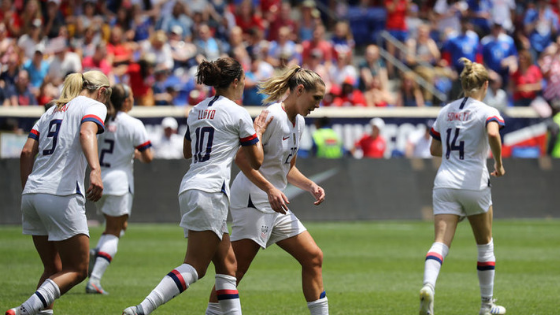 Soccer fan or not, everyone was captivated by the US Women’s Soccer team and celebrated when they won the World Cup on Sunday.

From taking a stand on equal pay for women to dominating their opponents on the field, there is a lot to respect and to admire about this special group of women. They overcame obstacles and 35 other international soccer teams to rise to the top and claim victory for the fourth time.

To be the best, we need to learn from the best.

Here are 3 Ways to Win Like the US Women’s Soccer Team:

Winning the World Cup was the major goal and every game on the road to victory were the mini milestones. Major goals don’t happen overnight. You don’t graduate from college and become the CEO of a Fortune 500 company within a week. If sitting in the C-suite is the major goal, then mapping out the mini milestones (promotions, professional development, mentors, sponsors, etc…) is critical to your success. Figure out what steps you need to take on your road to victory.

If winning was easy, everyone would do it. What separates champions from contenders is an unwavering belief in the inevitable outcome and an unbreakable commitment to do to whatever it takes to get there. This team faced political backlash, numerous injuries, and unprecedented pressure and expectations and, yet, they never doubted, they never gave up, they never gave in, and they never lost sight of the goal. That’s the level of conviction you need to cross the finish line.

Surround Yourself with the Right Team

No one achieves success alone, but it takes the right team with the right combination of personalities, talents and intangibles to win a World Cup. It’s often described as a “Dream Team” when a seemingly disjointed group of people come together, make magic and win championships. You need a well-rounded team filled with different strengths and perspectives, and a deep bench that offers an endless reservoir of resources so you can lift each other up and raise the trophy together.

What Army Ranger School Can Teach You About Managing Your Career

Today is a special but bittersweet day. It’s my son’s 23rd birthday and the first…

I’m pretty sure I stole this title from someone else, or perhaps I saw it…